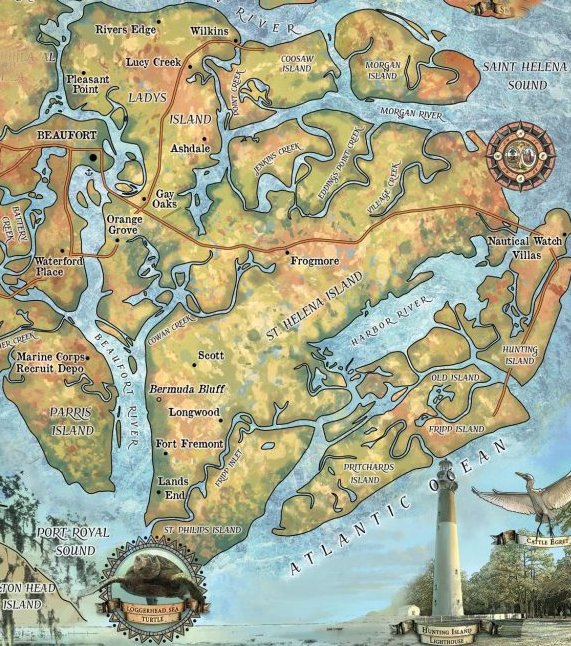 North of the Broad River

Beaufort is a charming southern town, steeped in history, and continually rated one of the best places to retire in the country. The Town of Beaufort is the historic center; the City of Beaufort comprises surrounding areas and communities.

To the east is Lady’s Island, a major area of growth.

To the South of Beaufort is the charming town of Port Royal, undergoing a major redevelopment of their Port.  To the west, Savannah Highway, leads to the Parris Island Gateway and points north and west, a little further west is SC-170 with the Broad River Bridge leading to points south.

South of the Broad River

The major areas of growth are occurring in Okatie, Bluffton, and Hardeeville which has ready access to I-95, the airport, and the anticipated new Port of Savannah.

Okatie lies along SC-170 from the Broad River to US-278.  Callawassie Island, Spring Island, Oldfield Plantation and River Bend are along the way.  Beyond US-278, SC-170 leads to Savannah, with many Bluffton and Hardeeville developments along the way.

Bluffton lies to the east of SC-170 all the way to Hilton Head.  US-278 (Fording Island Road) is along the north, SC-46 (May River Road) is to the South, and Bluffton Parkway meanders between the two, joining US-278 at the “flyover” leading to Hilton Head.

Sun City is just west on US-278. Within the private gates of Sun City Hilton Head, you’ll find resort-style amenities and activities, including three golf courses, multiple fitness centers and pools, and a performing arts theater. River Bend in Okatie is their upscale section with custom homes and larger treed lots.

Hardeeville (Jasper County) lies to the west on US-278, and points south, west of SC-170. Many new developments attract many young families and retirees.

For ADA assistance, please email compliance@placester.com. If you experience difficulty in accessing any part of this website, email us.

Sign Up
Already a User? Sign In
You have been successfully registered
Please check your email.
Go to the homepage
Sorry something went wrong
Please try again.
Try again

We are glad you seem to find our site useful. Please provide contact information so we can reach out to help, and you can continue browsing communities or searching for properties.
Already a User? Sign In

In order to log in to your account, you need to confirm your email address. Please check your inbox!
Go to the homepage